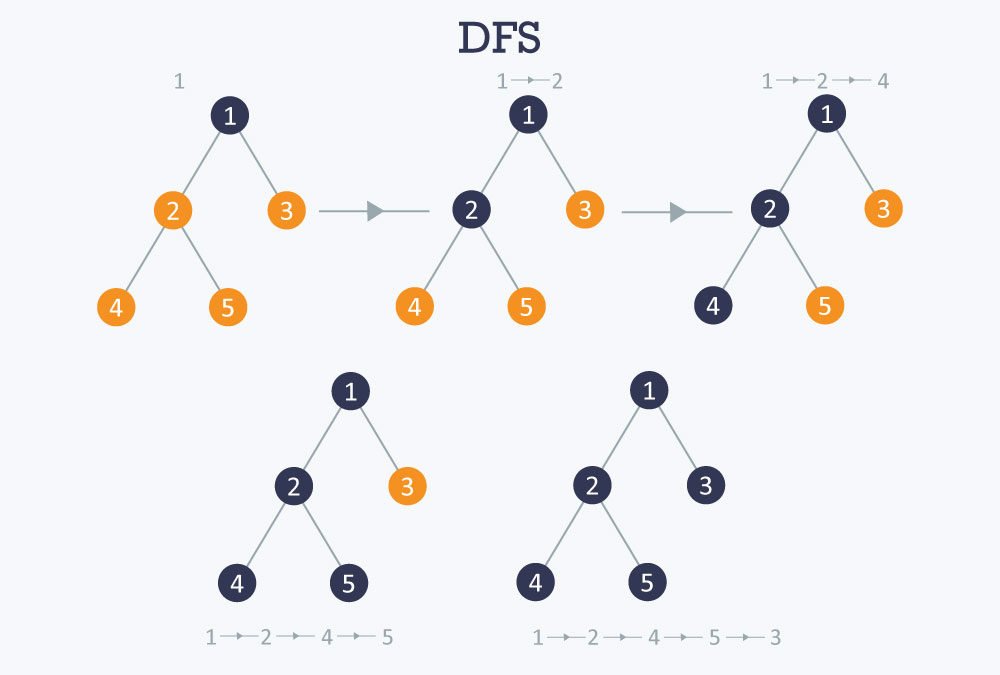 Depth first search is another way of traversing graphs, which is closely related to preorder traversal of a tree. Recall that preorder traversal simply visits each node before its children. It is most easy to program as a recursive routine:

for each child w of v

To turn this into a graph traversal algorithm, we basically replace “child” by “neighbour”. But to prevent infinite loops, we only want to visit each vertex once. Just like in BFS we can use marks to keep track of the vertices that have already been visited, and not visit them again. Also, just like in BFS, we can use this search to build a spanning tree with certain useful properties.

for each neighbour w of v

if w is unvisited

The overall depth first search algorithm then simply initializes a set of markers so we can tell which vertices are visited, chooses a starting vertex x, initializes tree T to x, and calls dfs(x). Just like in breadth first search, if a vertex has several neighbours it would be equally correct to go through them in any order. I didn’t simply say “for each unvisited neighbour of v” because it is very important to delay the test for whether a vertex is visited until the recursive calls for previous neighbours are finished.

Just like we did for BFS, we can use DFS to classify the edges of G into types. Either an edge vw is in the DFS tree itself, v is an ancestor of w, or w is an ancestor of v. (These last two cases should be thought of as a single type, since they only differ by what order we look at the vertices in.) What this means is that if v and w are in different subtrees of v, we can’t have an edge from v to w. This is because if such an edge existed and (say) v were visited first, then the only way we would avoid adding vw to the DFS tree would be if w were visited during one of the recursive calls from v, but then v would be an ancestor of w.

As an example of why this property might be useful, let’s prove the following fact: in any graph G, either G has some path of length at least k. or G has O(kn) edges.

The water jug problem consists of a condition in which one has to fill an unmarked 4 litre jug exactly with 2 litres, Another 3 litre unmarked jug is also provided.

The algorithm works by first finding out all the possible moves right from the initial state which is (0,0) all the way till the goal state (2,X)

It then searches Breadthwise until the required node is found then exits successfully with the shortest procedure to that node.

The following is based on my interpretation. Yours might be different to mine. The goal here is for you to realize that, depending on the situation, we may want to take readings more frequently. Today, we’re actually learning about how images are represented in computers, but let’s keep in mind these ideas about how often to take a reading or measurement. Each item in the list represents a non-denominational holiday

This list happens throughout the year and repeats every year With all of the bits flipped to 1, the largest number you can make is 63.75. Note that this is smaller than the largest you can make with a traditional Flippy Do, which is 255. This is because we have shifted two bits to represent smaller numbers (0.5 & 0.25)